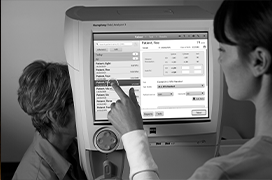 Published in Czech and Slovak Ophtalmology: 2021 - 5

Aim: To compare the results of short-wavelength automated perimetry (SWAP) in diabetic patients without retinopathy and healthy subjects and show if it is possible to detect an abnormal function of the retina in diabetic patients before vascular changes on the retina develop. Further, the effect of diabetes duration and long-term glycaemic control on the visual field was examined.

Methods: The study group included 22 patients with diabetes type 1 or 2, without any signs of retinopathy. The control group consisted of 21 healthy subjects. Short-wavelength automated perimetry was performed on the Humphrey Field Analyzer (HFA 860, Carl Zeiss Meditec), SITA SWAP, 24-2 test. In diabetic patients, the duration of diabetes and the level of glycohemoglobin (HbA1c) was registered. The visual field indices MD (mean deviation) and PSD (pattern standard deviation) were compared between both groups by the Mann-Whitney test. The correlation between the visual field indices, HbA1c and duration of diabetes was assessed by the Spearman correlation coefficient.

Conclusion: Short-wavelength sensitivity of retina seems to be affected in diabetic patients without clinically significant retinopathy suggesting a neuroretinal impairment at early stages of the retinopathy. We found no association between the visual field and the control or duration of diabetes.