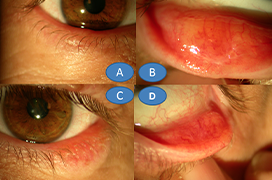 Published in Czech and Slovak Ophtalmology: 2021 - 5

Aim: To present rare form of lids amyloidosis, in the context with literature and remind a Czech professor Vrabec, F., MD, an important pan-European ocular histologist.

Case report: 37 years aged man was examined for eyelids mass on the department of ophthalmology of the Teaching Hospital Kralovske Vinohrady, Prague, Czech Republic in June 2018. The finding looked like chronic chalazion on the right side and chronic hordeolum on the left side. No acute phase was noted within last several months by the patient. Yellowish to lightly brown friable, partially transparent mass was obtained by excision. Amyloidosis of the AL type was revealed histologically, and diagnosis was followed by extended excision and plastic surgical reconstruction of the lower eyelids on both sides. No systemic disease underlying the amyloidosis was disclosed by following through diagnostic work-up of the patient.

Results: Amyloidosis was illustrated initially by Congo red staining with characteristic dichroism in the polarized light, then it was analysed immunohistochemically, with positivity for kappa light chains. Systemic amyloidosis was excluded, as well as monoclonal gamapathy. Only slightly increased number of plasmacytes (up to 10 %) was revealed in the bone marrow biopsy. The surgical solution was optimal for the patient, and he was without any recurrence and problems of lower eyelids three years.